Grab your pooch and your popcorn and settle in on the sofa for some puptastic ESA news. This week we’re covering two positive emotional support animal news pieces. The first is about a republican senator pushing to pass an ESA bill that aims to protect ESA owners who wish to live in rented condos or apartments with their ESA. The second piece is about a new Netflix series that stars an emotional support dog and highlights the important role ESAs play in the lives of young people suffering from mental and physical disabilities.

Republican Senator Pushes for ESA Bill to Pass in the House

South Florida Republican Senator Manny Diaz is pushing to see his ESA bill pass in the House of Representatives. The bill is aimed at protecting ESA owners who want to live in rented condos or apartments with their emotional support animals. The bill died last year, but the revised version focuses on ESA owners renting condos and apartments, and now excludes any mentions of ESAs being allowed in hotels or other dwellings.

Diaz spoke at length about how prevalent ESA fraud is, saying “You can go on the internet and pay a fee, and with one click, you can get yourself a printed certificate that says you need an emotional support animal,”. The bill Diaz is proposing would make misrepresenting or lying about needing an ESA a second-degree misdemeanor.

A new Netflix series, called “The Healing Powers of Dude“, tells the story of 11-year-old Noah Ferris, played by Mauricio Lara. Noah is a student struggling with social anxiety disorder, who is navigating life in middle school with the help of his emotional support dog “Dude”. Dude is Noah’s constant companion and helps Noah cope with the debilitating symptoms of his mental disability.

The series does not only shed light on mental illness. Lara’s co-star, Sophie Kim, plays the role of Amara, Noah’s friend, who also has a disability. The actress has a condition called “Ullrich Congenital Muscular Dystrophy” and has been using a wheelchair since she was four years old. The show has been praised for having an actress with a real disability appear in the series.

What sets this series apart from other shows that touch on the topic of mental illness, is that it targets a younger audience. In an interview, Lara rightfully said that “It’s a topic that’s been talked about among adults, but it’s not really talked about when it comes to kids,”. “There are so many kids who suffer from social anxiety disorder, and I think they’re just normal people trying to live their lives and they have the same struggles as us.” he added.

CertaPet’s Views on This Week’s News

As always, CertaPet is happy to hear about ESA legislation that aims to make the lives of people with mental disabilities easier. The bill proposed by Senator Diaz, is very similar to the Fair Housing Act (FHA) but aims to clarify the law and make it easier for everyone involved to help people who want to live in rented housing with their ESA. It also aims to make misrepresenting a pet as an ESA, or faking the need for an ESA, a second-degree misdemeanor.

This is something CertaPet always advocates for because we believe that only people with a real mental illness or emotional condition should be prescribed an ESA from a licensed mental health professional (LMHP).

As for “The Healing Powers of Dude”: We. Are. Excited! It’s amazing that Netflix is bringing us a series solely centered around emotional support animals and the beneficial impact they have on the lives of people living with a mental disability. Furthermore, the fact that it tells the story of middle-schoolers, is a good reminder that mental illness is not limited to adults. Mental health is an issue that concerns people of any age, and this series is a good reminder to be mindful of the mental health concerns facing a younger generation.

If you are suffering from a mental illness, take CertaPet’s free online 5-minute pre-screening to see whether you may qualify to get an ESA. If your answers indicate that you may qualify for an ESA, we will connect you with a LMHP in your state for further assessment. If you do qualify, you could have your ESA letter in next to no time! 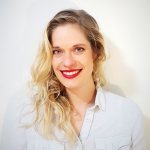 Happy-go-lucky dog mother and word lover who calls the heart of the South African Winelands home. She is an advocate for animals and mental health awareness. Other than animals, her passions include wine, Taylor Swift, her Book Club, and Lego.