Much of the stigma surrounding mental health topics and talking openly about mental health has been lifted in the last couple of years. With the political, economic, and environmental unrest of the past year and a half, mental health awareness is top of mind. Many Americans feel more comfortable with straightforward communication about their mental and emotional health.

While massive strides are being taken to destigmatize mental health and allow it to be openly discussed, it remains a pervasive issue across the United States. So are there areas where the mental health crisis is particularly prominent? Is your state unusually embattled with mental health and emotional concerns? We at CertaPet decided to find out.

The Rate of Poor Mental Health Days by State 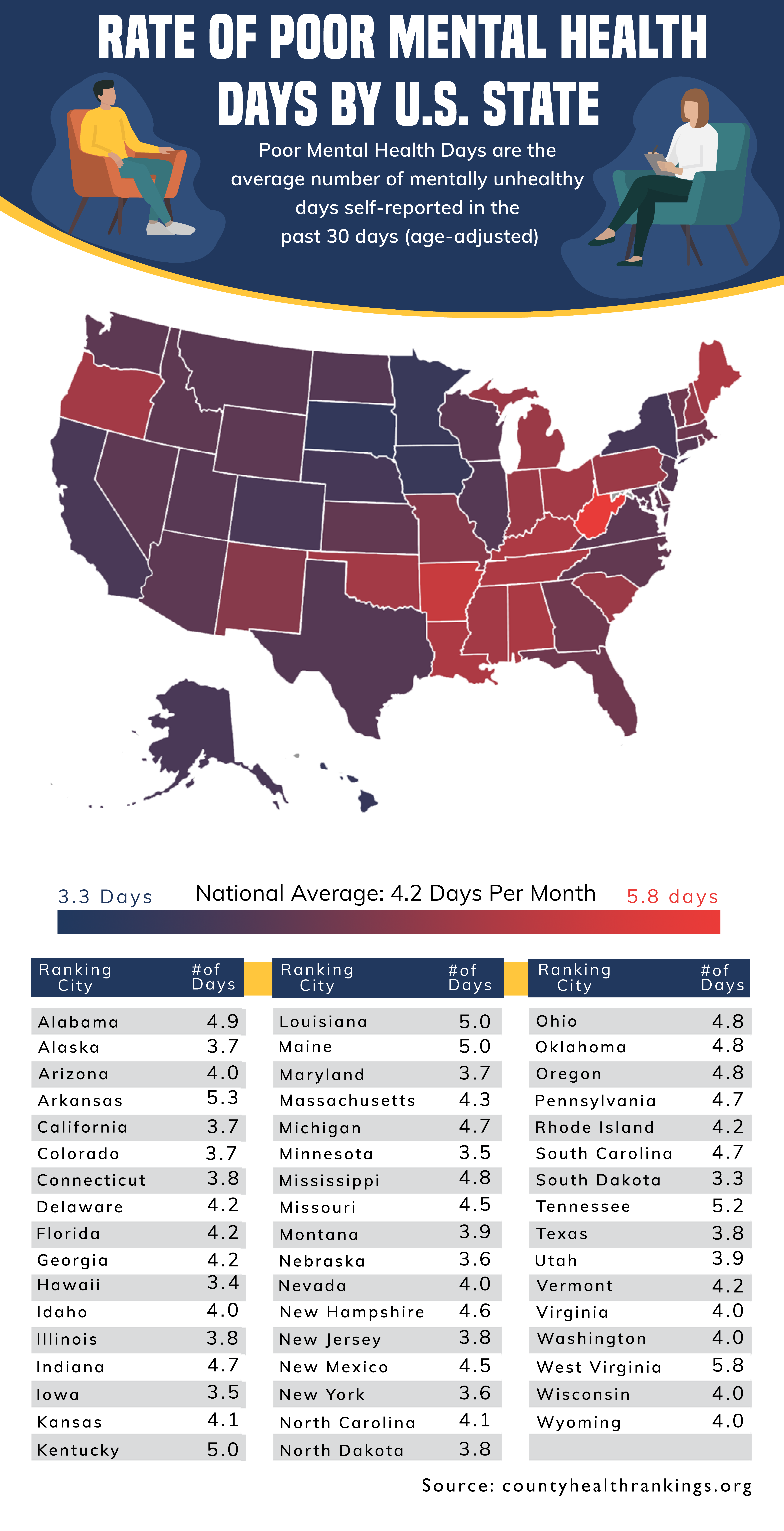 Our results showed that, nationally, Americans face an average of 4.2 poor mental health days every month—almost enough to round out a full workweek. This number varied from state to state, with the lowest being 3.5 days and the highest being 5.8 days. This means that the highest and lowest rate of poor mental health days per month is just 2.3 days apart, indicating that the country as a whole is suffering at a similar level.

Because there wasn’t a big difference among the average number of poor mental health days by state, we decided to drill in deeper and look at the same data in the 50 most populous cities.

The Rate of Poor Mental Health Days by U.S. City

Use the interactive table below to explore the dataset for yourself. Hover over each pinpoint to view the average number of mental health days in a 30-day period for that city.

In terms of the overall range of average mental health days by city, the highest average we saw was 5.6 days, in Philadelphia, Pennsylvania, and the minimum was 3.4 days, in San Jose, California.

It was interesting to find, however, that only 14 cities had fewer poor mental health days than their respective states while 33 cities—more than twice as many—had more than their respective states. Whether this is due to the bustling lifestyle of most metropolitan areas, close proximity to strangers during a pandemic, or something entirely different, we may never know. But it does suggest that most city dwellers may be having a harder time with mental health than their rural counterparts.

While we can’t hope to portray the extent of the mental health crisis with a single metric, it did allow us to get a glimpse into some of the consequences it causes in every U.S. state. We saw that the issue of mental health is widespread across the country with little variation in the average of poor mental health days in each state and the largest cities.

The reasons for this are too many to count and the best thing to do is normalize mental health issues through public discourse. It is also important to understand that help comes in many forms, such as through animal assisted therapies. We provide education and resources on how an emotional support animal or psychiatric service dog could be part of your ideal care plan and help to support your wellbeing.

The holiday season is fast approaching. Jet-setting on holiday get-aways with our family is END_OF_DOCUMENT_TOKEN_TO_BE_REPLACED